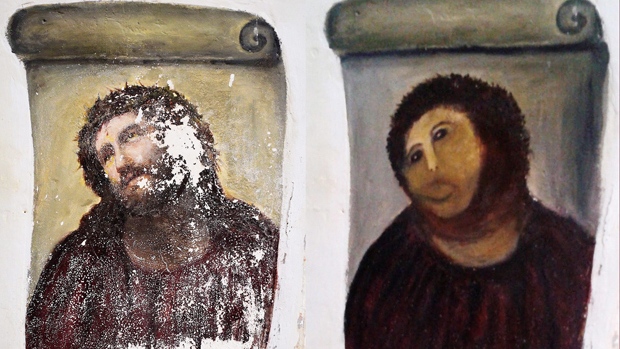 How far would you go for your favorite meme? According to Borja Mayor Eduardo Arilla, 160,000 people traveled to his small, northern Spanish town just to feast their eyes on an internet sensation. And now the meme that became known as “Beast Jesus” has resurrected for the sake of photo-ops.

The story of octogenarian Cecilia Gimenez’s “restoration” of a Christ fresco in a local sanctuary went viral in 2012, and to this day, is probably one of my favorite #nailedit moments of the internet age. “Ecce Homo” (“Behold the Man”) was a 100 year old painting by Spanish artist Elias Garcia Martinez. But Gimenez’s interpretation —no, revitalization— of the fresco gave Jesus a sad monkey face. Many were outraged by the update, though a case could be made that her interpretation was a prophetic reminder of human fallibility, creating a more nuanced image of the Christ to represent our modern lens. Twitter had no choice but to rename the masterpiece “Ecco Mono” or, “Behold the Monkey.”

Sure, it was funny, but can a joke stay funny for four years? It’s unlikely that a viral image this old can sustain an entire new tourism campaign. Yet Borja’s tourism board seems to be okay with their new brand for botching things, and is hoping to leverage Ye Olde Beast Jesus by creating a center that celebrates the fresco. That’s right, it will be a museum dedicated to one piece of notoriously bad art.

“It’s to give the painting a new impetus,” Arilla told The Associated Press. While locals were originally confused by the painting’s popularity, the fleet of cash-carrying tourists that came to the small town could not be denied. Restoration marvel Gimenez attended the center’s grand opening on Wednesday, along with the granddaughter of the original artist whose work is gone forever. No doubt her family is thrilled.

In addition to a gift shop that sells teacups with the Jesus/Monkey face (which is totally going on my wish list) the center will “bring together stories, photographs and videos documenting the impact of the restoration.” I’m not making this up. All of this is just for an internet meme. Borja’s tourism board is hoping that Beast Jesus will attract up to 30,000 visitors annually.